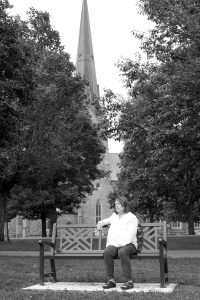 A few weeks ago, I attended a gathering of my local chapter of the Catholic Network for Women’s Equality (CNWE). CNWE  is guided by a vision of justice and equality for all persons manifested in word and action in the Catholic church and throughout the world. CNWE members in my local chapter and across Canada have been supportive of the research at the intersection of religion and family violence conducted by members of the RAVE team over the years.

Three women from our local chapter had recently attended a We Are Church event in Ireland which featured Sister Joan Chittister, OSB, Benedictine nun, well-known American author and advocate for women’s equality and Dr. Mary McAleese, former President of Ireland, Professor of Criminal Law and current Chancellor of Trinity College Dublin. During our afternoon together, we watched a video of the event. When asked to describe the contemporary Catholic church Chittister said that women are invisible and McAleese elaborated saying that women’s invisibility was deliberate and structural. For many Catholics, the invisibility of women in the church, is a form of structural violence.

This experience prompted me to revisit the Catholic church’s response to the problem of domestic violence – another form of violence against women and a serious impediment to women’s equality. Almost a decade ago, I conducted a qualitative study of Catholics from three dioceses in Canada to explore Catholic leaders’ experiences of ministering to families experiencing domestic violence. I undertook the study because the Canadian Conference of Catholic Bishops (CCCB) had denounced domestic violence in 2000 with their pastoral statement, “To Live Without Fear” and had encouraged Catholics to work for short- and long-term solutions. I spoke with clergy, nuns and laity who held leadership positions in Catholic diocesan offices, parishes, schools, agencies, and shelters.

I found that domestic violence was addressed in some marriage preparation courses but not all. Some bridges had been established between churches and community domestic violence services, but newly ordained priests were unaware of these networks and unable to make referrals.  Catholics working in marriage tribunals had knowledge of the impacts of domestic violence on families but their ministry did not extend beyond the tribunal walls. While Catholic school chaplains, immigrant settlement workers and shelter staff were aware of the cultural sensitivity required when working with immigrant women who experience domestic violence, clergy in multi-ethnic or ethnic Catholic churches had never given a homily about domestic violence. The study identified the need for domestic violence training for clergy and the absence of information on domestic violence and faith for Catholic survivors. More details about the study can be found in the chapter I wrote for the book Strengthening Families and Ending Abuse: Churches and Their Leaders Look to the Future.

Ten years after that small study, I cannot find information on domestic violence on the websites of the CCCB or the Catholic Organization for Life and Family which was co-founded by the CCCB and the Knights of Columbus. I did find information on domestic violence on the United States Conference of Catholic Bishops website For Your Marriage. I also found a link to the website Catholics for Family Peace which is a research-based initiative that produces resources to help promote family peace and prevent and respond domestic abuse.

Hopefully there are more resources available online or in print in local communities to assist Catholics who are suffering in situations of domestic violence. My study showed that there are some bishops, priests, nuns and laity whose faith, education and passion for justice compels them to speak out about violence against women in all its forms, including domestic violence.