HomeBlogReflections on Nature Religion in a Man-Made World

Reflections on Nature Religion in a Man-Made World 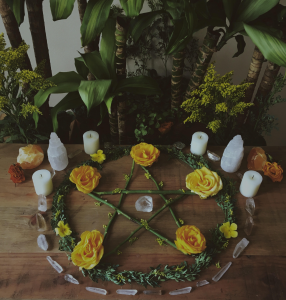 I am Wiccan. I also have an academic interest in Wicca and my research  examines how the Wiccan community deals with and responds to the representations of their religion media such as television shows and movies.

Wicca is a Neopagan religion that has a dual divinity of a Goddess and a God. This religion is mainly considered to be a female religion as the majority of members are women. This religion emphasizes nature as being sacred and sees the earth as a manifestation of the divine. There is considerable variation between the groups of this religion. This is because of how they emphasize each group having independent beliefs as well as having no centralized text, unlike many other religions. A part of this variation is that there is no organizational hierarchy to this religion, with no leaders or groups in charge of the religion as a whole. While every group does have their differences in practices and traditions, some elements tend to be in common between most. A belief in magic is one of the foremost similarities. Another main similarity is the worship of a nature Goddess, though the exact form this deity takes varies. The Sabbats, or holidays of this religion, also tend to be shared between groups. These holidays take place at the four changes of the seasons, and the remaining four take place midway between these points, each with their own lore and meanings. In addition, many follow some form of a belief in non-harm being an essential value for their religion, whether this takes the form of a rule of harming none, or beliefs based on the idea of karma.

Wicca is seen by many as a primarily female religion, both in academia and in the media. Many also see this religion as being particularly feminist, especially with many groups focusing more on the worship of the Goddess rather than the God. In these traditions, the God is either seen as equal to the Goddess or as a consort, with some groups worshipping the Goddess alone. Many of the leadership positions in Wiccan groups are held by women in the rank of High Priestesses or similar roles. Research has also shown that more Wiccans and Neopagans are women than men. In movies and television shows with Wiccan characters, most of them tend to be women as well.

Many people who are Wiccan or Pagan are persecuted in various ways for their religion. This persecution can vary from schoolyard bullying to workplace persecution to being isolated or disowned from family members. Wiccans often suffer from those who are against or intolerant of their religion. Wiccans and Pagans have reported issues with their neighbours reporting them to child services or having judges make custody decisions against them due to their faith. In addition to real-life attacks, people also attack the Wiccan community online. There are many websites in existence accusing Wiccans of being Satanists, devil worshipers, and various synonyms for evil. In addition to these more overt issues, Wiccans also suffer from people seeing them as immature or foolish due to their beliefs. Wicca should have just as much right to exist and be practiced as any other religion, with practitioners being treated with dignity. However, in today’s world, this does not always happen. Many Wiccan hide their religions, staying in the proverbial broom closet due to fear from the possible backlash from the world around them. This is a sad truth of the world we live in, and one I hope my research may help to draw attention to. Without knowledge, the world won’t change, and change is necessary for the betterment of everyone. A world where everyone can believe and practice what they wish without fear of discrimination may be a lofty and unreasonable goal; however, it is still one that I believe is worth pursuing.