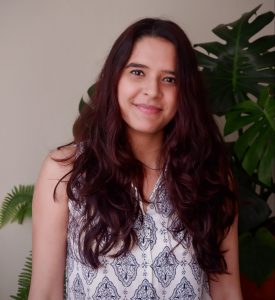 As part of my doctoral research, I am exploring individual and collective memories of collective violence in India among Muslim and Sikh Canadians who immigrated to Canada. I understand collective violence as having a certain kind of intentionality to it based on political, economic, and religious grounds. A few examples are genocides, wars, pogroms, and riots. Among many other things, my academic journey has helped me develop this topic of study which is based on a few crucial themes—memory of violence, pre-migration trauma and their implications on post-migration living and settling in Canada.

Dr. Catherine Holtmann and I wrote a chapter together which addressed theoretically how Indian Muslim immigrant’s pre-migration experiences of violence might impact their post-migration experiences of intimate partner violence. For example, we suggest that post-migration stress may trigger individual’s memories of violence and associated feelings of shame. We recommended that training for public service providers receive education and training in recognizing and responding to pre-migration trauma expressed by members of ethno-religious minority groups.

Other studies have explored how experiences of intense violence and the associated trauma linger on within individuals. Through a qualitative study, I am hoping to establish my argument that understanding pre-migration trauma and its implications requires understanding the memories of individuals and communities in their country of origin. By exploring the composition of memory, how people remember violence that they embodied, and how memories are communicated to the next generations are some important themes that should be understood to critically evaluate their implications on immigrants’ and refugees’ post-migration living experiences.

I will attempt to understand these complex issues surrounding memory, violence, and trauma by combining the conceptual frameworks of intersectionality, collective consciousness, and ‘referring’ as a social act.  For example, intersectionality is adopted in this study to understand collective violence which characteristically targets certain ethnic or religious minorities. Moreover, the nature of collective violence also includes violence against women in varying degrees (for instance, the Rwandan genocide or the Bosnian war). Intersectionality also helps in understanding the implications of those memories while living in a new country and the shift in socio-economic standing from country of origin to country of residence. In my view, collective consciousness is constructed and influenced not just through social institutions like religion and families, but these institutions can be impacted and sometimes subverted by politicians and military personnel. This is why we see the complicity of governments, for example, during civil wars, riots, and genocides. ‘Referring’ as a social act is adopted as this study relies on understanding the lived experiences of Sikh- and Muslim-Canadian immigrant communities and their social contexts making their stories and interview responses social acts in themselves. A group’s memory of an event of the past continues to impact their present. In other words, when understanding collective memory of riots for a ethno-religious minority community, the riots may still impact the present. This highlights the intergenerational character of memory and how it is passed to newer generations who have not embodied collective violence but are affected by it in their day-to-day living. A prime example of this is Holocaust memories.

I hope my research findings can help in developing tangible recommendations and social policies that can positively impact post-migration living for immigrants and refugees in Canada and all over the world.