Silence is Not Spiritual 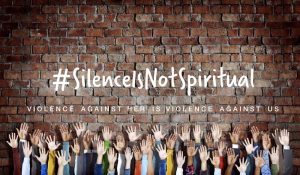 Recently, a video of American megachurch pastor Andy Savage went viral in which he referred to a sexual assault allegation from his time as a youth pastor as a “sexual incident” (a term that obscures the perpetrator/victim dynamic of assault), and received a standing ovation from his congregation in response. While I was deeply heartbroken by the way this story unfolded, I cannot say I’m surprised.

I’m a first-year master’s student and member of the Religion and Violence Research Team at the Muriel McQueen Fergusson Centre for Family Violence Research. My research explores how Christian communities conceptualize and respond to sexual violence.

For the past 6 months I’ve been analyzing Christian youth group resources and dating advice books to explore if and how they talk about consent and sexual assault. Overwhelmingly, I’ve found that these resources, much like pastor Andy Savage, conflate consensual premarital sex and sexual assault under the broader label of “sexual sin”, and approach both with an attitude far more suited to the former than the latter.

As a Christian myself, I know that youth groups can be valuable spaces for young people to learn about healthy relationships in the context of their faith. Indeed, this website offers a number of resources, including videos that can be used in a youth group context, as well as guidelines for religious leaders on responding to victims of sexual assault.

However, youth groups can also be places of shame, silencing, and, in the case mentioned above, abuse. With approximately 1 in 3 women and 1 in 7 men experiencing some form of sexual violence in their lifetime, and with the highest rates of assault occurring in the 15-24 age range, it is essential that youth group leaders talk about relationships and sexuality in a way that is informative, sensitive to survivor’s needs, and that members and leaders alike are held accountable for their actions.

This fall, I’ll be expanding my research through focus groups with youth group leaders and young Christians. After spending the past while analyzing books and videos, some of which date back to the mid-2000’s, I’ll be grateful for the opportunity to talk with contemporary young Christians about these important issues.

I truly believe faith communities can be spaces of healing, justice, and accountability. Indeed, I’ve been encouraged to see #churchtoo and #silenceisnotspiritual trending as church-specific companions to the #metoo movement (a movement that calls out sexual harassment and sexual violence). Through my research I hope to create teaching resources that empower youth group leaders and young Christians alike to respond to victims of sexual assault in a safe, informed, and compassionate way.