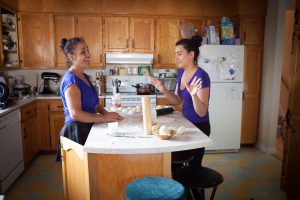 My Iranian friend arrived here two months ago. She didn’t know many things. I called her – when I found out that this family arrived, I called them. I offered to them, “Please, come to our house for a dinner I prepare for you because you haven’t settled anything for your house now.” The family came to my house for dinner.

This quote comes from a conversation I had with an Iranian-Muslim immigrant mother who had also recently arrived in Canada. She knew how hard it was to settle into a new home, especially when you have young children. She was still adjusting to her new life, but she reached out to a family whom she didn’t know, because she cared. She and her family had experienced care from members of the local Iranian community. In addition to her role as a caring mother, she made it a priority to care for others.

Care is a gendered religious and secular value. Religious traditions like Judaism, Christianity and Islam, emphasize that women are essentially caring – it is part of their nature. In Canada, women, religious and non-religious, still shoulder most of the responsibilities in caring for young children and elders in families. Women are more likely to be employed in caring professions such as nursing and early childhood education. Certainly, girls and women are socialized into caring roles in families. Care is expressed through concrete activities of such grocery shopping, cooking and serving meals, doing laundry, listening to problems, encouraging those who are struggling, showing hospitality to friends and neighbours, and celebrating holidays together. For religious women, caring service builds the virtues of patience, kindness, generosity, compassion, sacrifice and forgiveness. For many religious women, practices of care are a meaningful part of their identity.

However, in situations of family violence, a woman’s role as caregiver is exploited. When her husband demands that she serve the needs of the family instead of working, then fails to give her enough money to feed the children, and prevents her from spending time with friends, he is controlling and preventing her from caring.

An example comes from a Filipina-Christian immigrant woman who told me about her sister:

Her husband was just using her, and she wouldn’t listen to our advice. . . Then they decided to move to [another city] which is really hard for us because she already had a stable job here. . . I can’t even call her now because she doesn’t have a cell phone now. She did it for her husband – to satisfy him – so that she wouldn’t have any communication with the people around her, so she gave it all up. . . One time when they were still here, she called me around 11:00, she was crying, her husband is beating her and threatened that he will kill her. . . She said, “I can’t do it anymore. I can’t handle it anymore!”

Women of faith need help in understanding domestic violence and recognizing when their role as caregivers is being abused. Religious leaders can help by affirming the interdependence of women and men in families. They need to talk openly about how caring for others depends on taking care of oneself – put your own oxygen mask on first before assisting others. Self-sacrifice in a situation of abuse is not a virtue. It is also necessary for religious leaders to explicitly describe abusive attitudes and behaviours and publicly condemn them. This information can help ensure women’s safety and spiritual fulfilment when caring for others.